Ages ago, before tea became a choice of beverage and a way of living, it was considered as a medicinal drink in China and also in other parts of Eastern Asia. Even today tea is considered to be a cure for many ailments in the Chinese medicines. Tea that has grown out from being medicine to a choice of beverage has spread in many parts of the world. The form and tradition of tea drinking has changed with time and culture.

China And The Art Of Tea Drinking

During the Ming Dynasty, tea houses began to spread all over China, and tea could be enjoyed anytime and by all, irrespective of time and age. Tea houses only served tea during that time. Another form of Chinese Tea Ceremony was called the Gong Fu. In this style a master, usually considered as an artist, prepared the tea for a group involving different styles. But nowadays, the scenario has changed, even though the importance of tea has not. Tea is still an integral part of any meal in China. 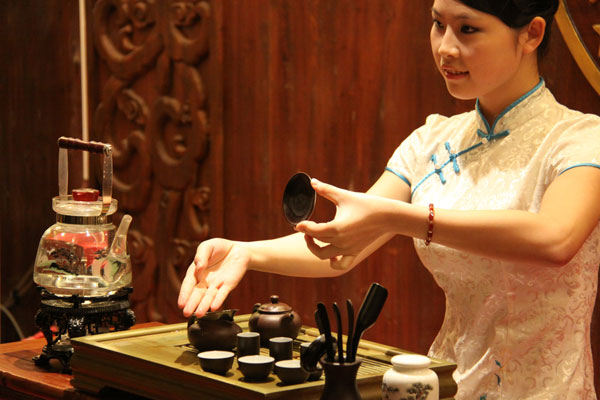 The Simple ‘Ti-Kappu’ From Japan

After arriving in Japan, many schools of tea ceremony emerged with influences from the monks to the samurais. In the tea ceremony, humility and respect are expected of the guests and the host. With regards to simplicity and balance, nothing in the tea room should be superfluous, loud or garish, in order to not distract from the moment. Many Japanese are still taught the proper art of the centuries-old ceremony to preserve the techniques.

A Casual ‘Adda’ Over Tea In India

India was rather a late entrant to form any such elaborate tea ceremonies. It was introduced to the common masses after the British Raj started tea estates in India. Although not ritualized, tea is more a part of everyday life at home, work, on the streets and while traveling. In India, often spices like cloves or cardamom and ginger is added to the tea along with sugar and milk. Tea is sold everywhere in India from railway stations to posh tea houses. The Great Royal Affair Of  England

The Afternoon Tea is synonymous to the English and it is still a ritual in England to have afternoon tea along with cakes, breads or scones. Started in the Royal Palaces, afternoon tea eventually went under many changes and reached even the working class people.

French And Their ‘amourous’ Affair With Tea

Among the other countries, tea in France started its journey from the aristocratic household for the first time, like England. Even today tea is a luxurious and elegant affair in France, with sophisticated porcelain teapots and elegant settings. The highest quality of tea is served with exquisite pastries, like tarts and petit fours.

Others In Love With Tea

Myanmar is one of very few countries where tea is not only drunk but eaten as pickled tea served with various accompaniments, known as ‘laphet’. In Morocco, mint-tea preparation is generally considered as masculine so it is usually prepared by the head of the family and in Bhutan butter and salt is also added with milk in the brewed tea.

The rituals and the names keep changing from one country to another but the love for tea is same all over.